Added by Swiss Chris about 5 years ago. Updated over 4 years ago.

i dont really know why this happens, but its definitely an issue in movian 4.99. when i downgrade to version 4.10, the same files play just fine without stutters. in version 4.99 most files have a rather short hang... a hickup and then continue to play fine. this is random and happens something like every 5min maybe...

the network buffer is always full and i dont suspect an network issue. i tried to monitor during play, but i did not find any obvious thing that differs from version 4.10. there is also no error in the log.

how can i debug this further? i really want to use 4.99 but its not possible to enjoy a movie with this hickups.

ive got multiple ps3 here and all have the same problem. cfw: rebug 4.78 with cobra mode. tried to disable cobra mode and other things, but that didnt make a difference at all.

Revision 4d732ce5
Added by Andreas Smas about 5 years ago

Revision c041a6c9
Added by Andreas Smas over 4 years ago

Revision c416d2fe
Added by Andreas Smas over 4 years ago

I've increased the size of the streaming buffer a bit.

This can cause the system to start use virtual memory. Please open system info (L3-button) and see if the

counters non-zero. Then we can continue from there and see.

that is something that i noticed actually and forgot to post. but this counter does indeed show nonzero values, but i was not able to find a matching time with the hickups - means... its sometimes non-zero, but the file plays fine - BUT if there is a hickup, the values are non-zero indeed.

btw: my ps3 are slims cech-2504 - the latest models that are jailbreakable... dunno if that makes any difference.

I can see the problem as well.. Not 100% sure if it's correlated to the VM page in/out though.

just tried it. still hickups. watching same movie, that is working fine in 4.10.

the problem is kinda random. sometimes there are quite a few hickups in a short time and then its fine for some minutes.

thanks a lot for checking

im watching a different movie now and until now it didnt happen.

ill check out some others and will report back.

i was able to watch quite some time now without hickups, but just now it happened again.

i checked L3 menu and i noticed that it shows me negative memory usage numbers. now ive got a lot hickups again. is this maybe some kind of memory leak?

The negative memory usage number is another bug though.

The problem is that sometimes the UI does a frame-skip and then the video renderer AV-sync code tries to re-sync, causing the glitch.

The AV sync code is almost the oldest code in Movian and I have some better ideas of how it should be implemented. I will need to take a stab at that.

At least the memory stats bug has been fixed now :-)

actually the problem is much better since you decrased the media buffer.

i dont know what happened on that day when i got the negative memory usage number, but after a restart of the ps3 it didnt happen again. there are sometimes short glitches, but i was able to watch whole movies without a hiccup with the newer versions. it still happens sometimes, but not that often as before - sometimes not even once per session.

Updated by Rob Koni about 5 years ago

I have another report of a negative memory 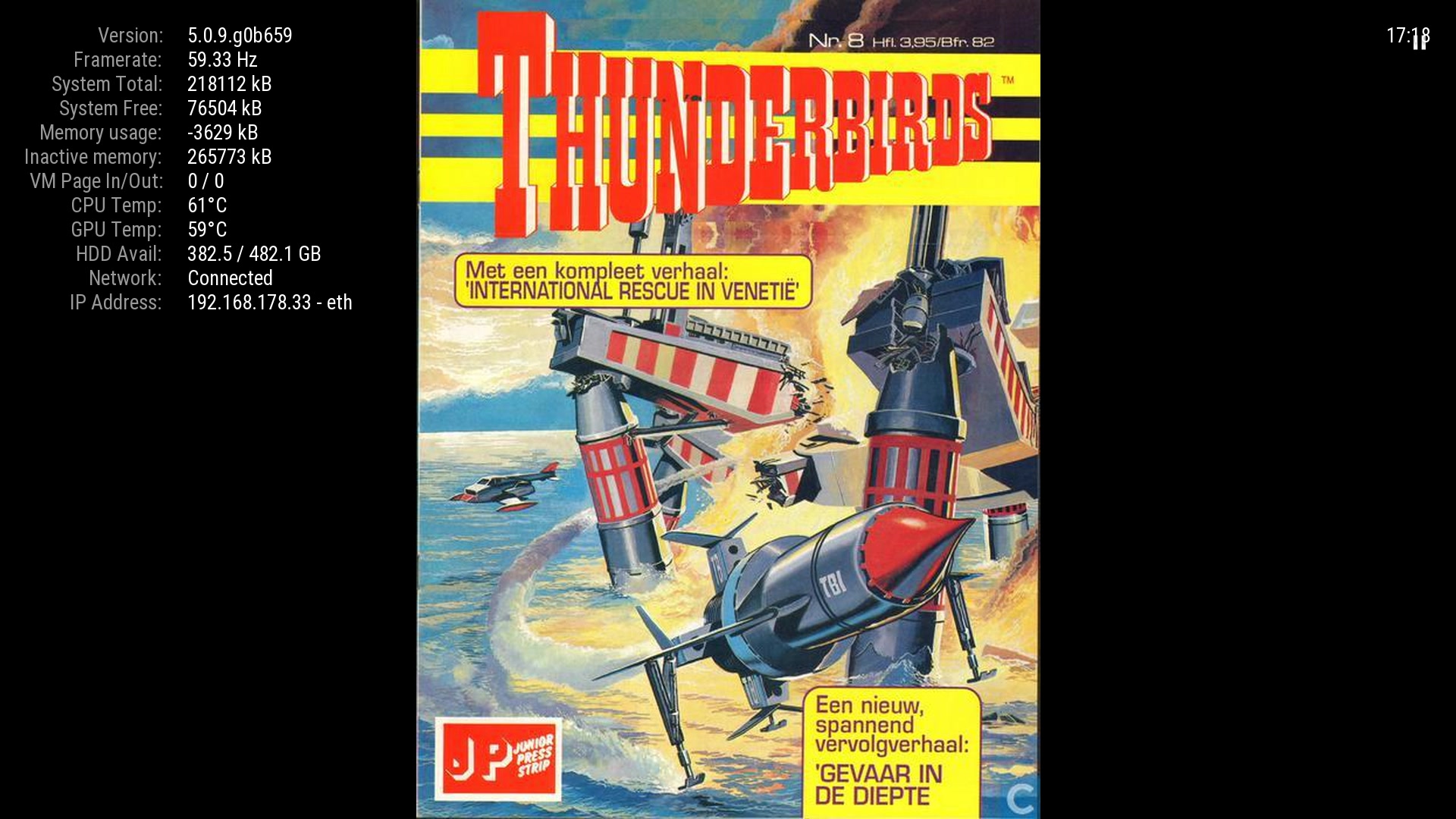 Updated by Rob Koni about 5 years ago

Noticed also that the clock is over the pause indicator in the top right.

in newest releases the problem seems to be worse or maybe its coincidence, but just now i tried to watch a movie and first i had a hiccup and then it freezed completely for a few seconds - but then continued to play. i never had full freezes before, just little glitches. here is the log from this session, maybe it helps you: https://app.box.com/s/u2n8scrz4bsfjlqgcqfqp3hjo7kj1i44

I have the same issue with stuttering / hickups in MKV movies like the guys above. I updated to the latest experimental release which is " 5.0.274 g8bfdf "in the hope that it might fix the problems. Sadly it doesn't.
I tried some troubleshooting from my side to find out where the problem could lies. So i tried to play movies with just 1DTS , 2 DTS, 4 tracks in a single MKV movie and even movies with DTS-HD HRA. Nothing much has changed for the better. :-(

This didn't happen with version 4. something which came with Movian as well. Too bad that i updated to version 5 as well now...
Here comes the strange thing. Yesterday i wanted to watch the movie " Alice in Wonderland " which has DTS-HD HRA audio tracks. Movian player got unusable after starting the movie / quitting it and internal hdd was running crazy. I had to wait around 5 minutes until i could use the player again. I tried another movie afterwards but i could`t play anything anymore until i rebooted the PS3.

I tried to play Alice right after starting the PS3 today and it was ok so far (i just moved back and forth).

I don't know why so many people don't like this new "Poster" option. We have a big 65" TV and a large living room. Were sitting not that close to the TV so its much better now. But thats my opinion ;-)

I attached two log files in the hop the can help you. Too bad that i didn't prepared a log file where i had this issues.
Henrik

I've added an option in settings -> video (at the bottom) where the user can control the amount of RAM used to buffer the stream during playback.

Please try to change it and see if it help (In particular try to set it to a lower value) and let me know if it helps.

I've added an option in settings -> video (at the bottom) where the user can control the amount of RAM used to buffer the stream during playback.

Andreas! Really nice! I have been asking about this also. Great!
BUT!

Can you make this buffer in percentage of free memory please!
Personally I would be glad to give movian for this 700MBytes instead of 64!
Because when there are very few seeders with not very good connection - it is VITAL!
Hope it is not difficult because it is done already.
Just tune it please for everybody to be glad.

Thank You so much Andreas for all your help. Videos are running super smooth now with your latest changes. I had to change the "RAM control" from default value to 16MB. With normal one or higher value, playback wasn't enjoyable (hiccups....).

Everything works fine ONLY if i use the "list" view. If i use the new "poster view" Movian and the System in general slow down over time. Usually after watching a Movie or series. I didn't find any errors in the log files but i can upload some if it helps.

Is there maybe a Memory leak ? Only Movian / PS3 restart fixes this poster issue for a while.

Thank You so much Andreas for all your help. Videos are running super smooth now with your latest changes. I had to change the "RAM control" from default value to 16MB. With normal one or higher value, playback wasn't enjoyable (hiccups....).

Everything works fine ONLY if i use the "list" view. With the new "poster view" Movian and the PS3 slow down over time that it`s nearly impossible to interact with the software anymore. This usually happen after watching a Movie or Series. I could`t find any errors in the log files but let me know and i upload them.

Is there maybe a Memory leak or something else ?

i actually noticed this too: movian gets slower and lags after longer use. im suspecting a memory leak aswell - but i didnt check listview yet... will try that to see if it fixes it for me too.

Updated by Andreas Smas over 4 years ago